Six years ago, I wrote the first post celebrating an important woman in my life, my very special Auntie Arlene. I updated the post in 2012, in honor of of her 94th birthday. Today, Auntie Arlene would be 99 years old, but she went home to Jesus in January. It feels strange, this first birthday without her in my world. I spoke to one of her daughters today, my cousin, Jane Buelow Luepke, one of the twins mentioned in the very first post. We reminisced and Jane shared a few details I had not known before.

My Auntie Arlene was unique in that she was the daughter of a twin, she married a twin, my dad’s brother, Elmer, and she became the mother of twins, my cousins, Jane and Janice. Additionally, she became the great grandmother of twins, which I always thought was fairly awesome! Why was this woman so special to me? It was through her that I was able to purchase the original Buelow homestead in rural Shawano county, which became my home for thirteen years. Living near her allowed our relationship to blossom and we spent a fair amount of time together, many lunches shared at the table in her apartment in town, many heartfelt conversations. We talked about everything- especially family history, much of which was recorded in her Bible. We discussed religion and politics, all those things one isn’t supposed to talk about in polite company. We didn’t always agree, but we could say anything and share a chuckle over our differences. She kept me informed about local events, and we discussed world events as well. For me, the most treasured piece of our relationship was that she was always in my corner, my biggest encourager. When I was debating grad school and ministry, she advised my to go for it, an affirmation I received gladly and gratefully. When I got my first Master’s degree in Christian ministry:pastoral counseling, I took that diploma to her and we opened it together. It was huge, much larger than the bachelor’s diplomas and we had all kinds of fun with that big diploma; it was like a scroll and I said I felt like the mayor of Oz, which caused a fair amount of laughter. She held on to one corner and I unrolled that diploma while my cousin, Jane, took pictures and joined in the fun! When I received my Master of Divinity (Mdiv) diploma this past May, I spoke with Jane and we agreed that her mom/my aunt was indeed smiling at, and cheering for, me. And while I knew she was in a better place, I missed being able to take a diploma to her one more time.

Auntie Arlene was my faithful encourager. When I was looking for confirmation of the path I had chosen, she reminded me why I was there. And that is the reason she was so special to me. I knew without a doubt that she was praying for me during my cancer battle and throughout my grad school journey; she told me so, regularly. She was a prayer warrior for her entire family, and I was blessed to be counted among them.

My Auntie Arlene was an influence from my youngest years. The Buelows were a large crew and on any given Sunday, any number of aunts and uncles with all the cousins would show up to share a meal and an afternoon of socializing. She had a ready smile and always welcomed everyone to her table.

Enjoy the photos; I have so many it’s hard to choose. We took a selfie every week when I visited. We had a system where I’d focus my phone camera and hold it, while she reached up and pushed the button. Below  is one of my all-time favorite photos, Auntie Arlene and me, approximately 1959, on the front steps of the Buelow homestead.

We re-staged that photo in August of 2011. Of course, I didn’t sit on her lap, but we had lots of fun and shared laughter, as you see. 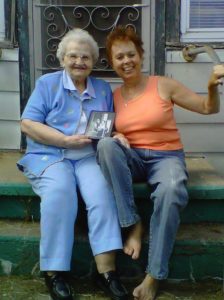 Please share in my bittersweet joy as I reminisce. She lived long and she lived well. I hope that each of you has someone who supports and encourages you as unconditionally as she did for me! And as I say often in these pages, hold those you love close and tell them, regularly and often, how very much they mean to you. Be blessed †

My very special  Auntie Arlene would be 99 today.