Today’s post is about a special person, my mom. On this day, Carola Esther Buelow (CEB), is 87 years old. As you can see from the photo below, she looks fabulous. I believe that’s because she is active, vibrant, and completely engaged in life, doing the things about which she is most passionate. Mom teaches piano nearly full-time, as she has since I was young, interacting with, and impacting, multiple families each week. She also works side-by-side and hand-in-hand with my dad in the church they planted in 2013.

I called Mom to get some background for the original birthday post in 2012; I rediscovered and learned some interesting facts. I’ve always known her to be an intelligent woman, graduating summa cum laude from University of Rhode Island as a member of Phi Kappa Phi, an academic fraternity, on June 8, 1953. That was also the day on which she became engaged to my dad. I have a harder time picturing her as a sorority gal, which she was – Alpha Delta Pi.  Among my daughters, Mom, and me, there’s a joke that back in the day “Grandma smoked cigarettes and dated sailors.” I share this joke with her permission; it makes us all giggle, probably shared for the first time on one of our ten annual four-day weekends in Chicago, trips that hold many special memories. Just look at her photo below, see the twinkle in her eyes.

This is a woman who has taught dozens of people, young and old, to make music; I know many of her students and those families cherish their relationship with her, any number of them multigenerational.  She’s a teacher at heart, even taught French at the Lutheran elementary school my brothers and I attended.

This is a woman ahead of her time.  After marrying my dad, she moved with him halfway across the country and spent the summer on the Buelow family farm (Her Father’s Homestead), a place dear to my heart, as many of you know. It was her second visit to The Farm, as my family called it.  As a wedding gift, Grandma Buelow had installed indoor plumbing. The city girl, an only child, lived at The Homestead, filled with family, for three months before traveling by steamer across the ocean to Germany in a day when cross-country and transoceanic travel were not common, leaving her family on the East Coast.  In Germany, far from family and friends, she gave birth to me, in an era when fathers weren’t allowed in the delivery room, though she was in a foreign country with limited knowledge of the language.

I’ve told my daughters often, usually referring to the Buelow side of our family, that we come from hardy stock.  Writing these words gives new meaning to that picture.  My mom, known as Gma to my daughters is as hardy as the best of them.  I am most happy to share her with you.  Joyeux Anniversaire, ma mére.  I love YOU! 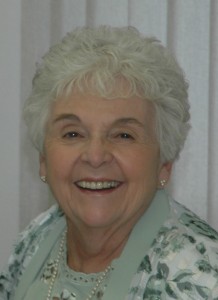