I have a group of friends that I believe may be fairly unique. We have a name and we gather annually, heading to the North Woods of Wisconsin from as far away as Florida. We’re old friends, some among us go back literally 57 years, the rest anywhere from roughly 30 to 50 years. We graduated from high school together 39 years ago last week. This is the year we are 57 and our annual gathering begins in just three days. Our host is Lana, the youngest of the group; for seven years we’ve invaded the North Woods to stay at Lana’s fabulous property north of Eagle River on a chain of 22 lakes. Our name, The Gazebo Girls, comes from the fact that we spend a fair amount of time in the awesome gazebo on the property and have a group photo taken there each year by a neighbor.  This is our fourth year with a theme.  Themes began with the year of Gazebo Gangstas, due to the fact that the Dillinger movie starring Johnny Depp had recently been filmed nearby.  We dressed in 1920‘s costumes and had dinner at a restaurant famous for being the site of an actual Dillinger shootout.  That was followed by the year of the Gazebo Pirates, in which we hired a pirate ship that cruises around the chain of lakes and is great for special occasions.  Picture eleven women dressed as pirates on a big ship flying the skull and crossbones, with blaring pirate music as we cruised the chain of lakes for three hours.  That was followed by Gazebo Cowgirls – more costumes and a trail ride. There will be the traditional Saturday on the pontoon boat with sun and food and lots of laughs.  Saturday night is our big dinner, prepared by our very own chef extraordinaire; she’s never let us down.  Coffee with Redi Whip, you know, that fabulous whipped creme in a can, is another tradition.  We’ll sing old favorites, loudly perhaps, laugh a lot, share a year’s worth of photos and bring each other up-to-date.  In just a few days, we’ll gather for a Gazebo Wedding, the theme for this year.  There’s a story behind the theme, which will remain untold at this time to protect the innocent 🙂

This year maybe somewhat bittersweet as last year at the beginning of our weekend, two of our group members lost their moms. The rest of us left the North Woods at the end of our weekend and headed home to attend funerals.  We’ve shared family rites of passage, marriages and grandbabies – supported one another through death, divorce, cancer and remission thereof and the safe return of a son serving his country. We know each other well and while this is about shared history for sure, it’s also about making new memories together.   I’m excited to get there; we’ll have a blast – incorporating a local street dance into our wedding theme and generally celebrating life and friendship.  As the childhood song says, “Make new friends, but keep the old, one is silver and the other gold.”  I’m getting ready to go; to get together and celebrate with friends as precious to me as gold!!

Below you’ll see two photos, one with most of the group present, the other an example of Lana’s dedication to theme – a Cowgirl centerpiece on an outdoor table.  I believe Patty went home with those boots 🙂 I can’t wait to see how the Gazebo Wedding 2012 unfolds; stay tuned… 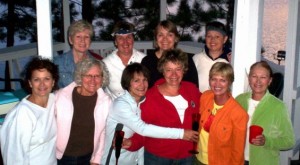 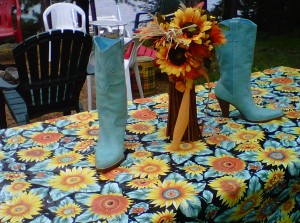